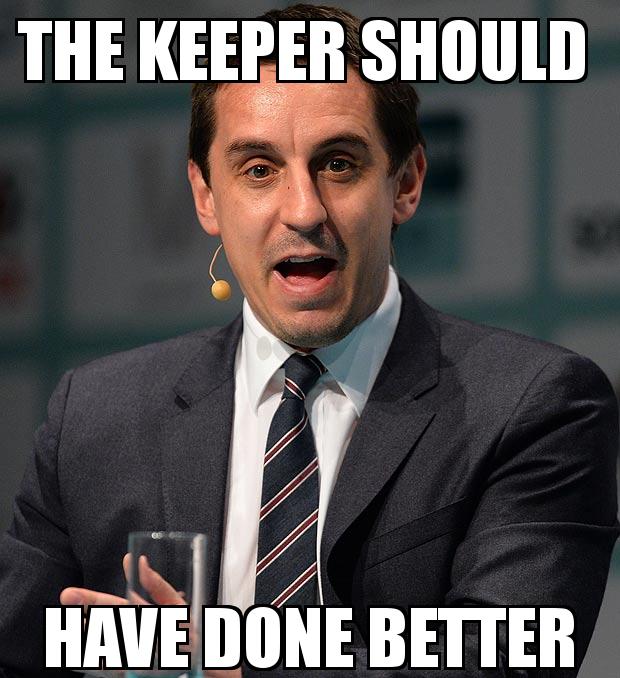 After watching the League Cup final on Sunday Afternoon, I felt I had to write a piece on Sky Sports’ ‘Goalkeeping expert’  Gary Neville’s comments about Manchester City’s Claudio Bravo, Arsenal’s David Ospina and goalkeepers in general.

Some of Neville’s comments about both keepers, Ospina in particular, spilled over from valued critique to just downright hatred. Comments such as “Shocking” and “I don’t think  Ospina is very good at all. In fact he’s awful” were just throw away.

Whilst I am no Ospina fan I did think his continued barrage of abuse was unfair and Neville has quickly established himself as a goalkeeper ‘basher’. A biased one at that! Analysing the game, I am in agreement that Ospina did not give much confidence to the Arsenal back line and did cut a hollow figure but Neville offered no explanation to why that maybe? The cliché comments just kept on coming.

It is important for non goalkeepers to realise that our position requires a completely different mindset and how important it is for them to be playing regularly before you can judge how capable we are. In Ospina’s case he has only played 17 games sporadically over the course of this season, therefore it is impossible for him to display any sort of form. Claudio Bravo is the captain of his country, Champions League, La Liga and Copa America winner. Yet because he had a shaky start to his Man City career he is being branded as useless. It is infuriating.

Claudio Bravo in action for Barcelona

Goalkeeping is all about rhythm and getting your eye in, not to mention having a relationship with the people in front of you. it is the equivalent of a new striker coming into the side and understanding how the team play and forging a relationship with the players around him. You constantly hear commentators empathizing about how he needs time to adapt…why not the same for goalkeepers? Answer.. because in Arsenal’s case especially, when the chips are down the goalkeeper is the one who gets hit first.

I have to admit, I am a Gary Neville fan and he is an excellent pundit on outfield issues. But when talking about goalkeepers, he does have certain favourites which he will gladly target for ridicule where others he will find excuses for. For me this was evident when I heard him commentating on Juan Mata’s  free kick vs Leicester City’s Kasper Schmeichel. It was brilliantly executed, over the wall and about two yards inside Schmeichels left hand post. Social media went mad, “Schmeichel has to save that” or “someone tell Kasper he can jump”. However here is where my problem lies. You could hear the hesitation in Neville’s voice. He desperately wanted to say something but he couldn’t, he wouldn’t… its Kasper Schmeichel.  If that goal had been conceded by Karius or Mingnolet it would have been the main subject of Sky’s Monday Night Football.

The media in general also need to be mindful in their targeting of goalkeepers. My fear is that it will deter the next generation of footballers from trying life between the sticks because of the sheer fear of the condemnation that goes with the position. Shortly after the match Rangers keeper Wes Foderingham summed it up perfectly.